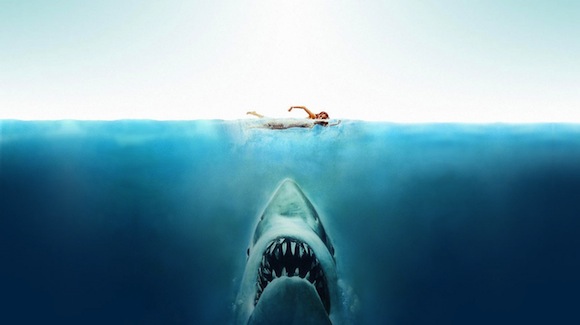 I often wonder what in the hell I would do if a shark randomly decided to make me its next happy meal. How do you survive something like that? Its not like I could wait for someone to blow it up with compressed gas. Nope. Survivors fight their own battles, plus it’s highly unlikely that Richard Dreyfuss would randomly show up and save me from a shark biting off my favorite limbs. I’m not necessarily scared of sharks, I just feel like out of all the people swimming in the ocean, a shark would overlook the fat guy on a tube and see my pale, Pinocchio-like legs and wouldn’t hesitate to rip them off with its chainsaw teeth. Okay… so maybe I am a little scared of sharks but do they really need to have that many teeth? It’s like a cruel joke.

Much like the shower scene in Hitchcock’s Psycho, Spielberg took something as innocent as swimming and turned it into a complete shit inducing nightmare. This film was so effective that when it released in 1975 it literally scared the living dayshits out of people and kept them from swimming in the ocean. These godless demon spawns that swim below our feet have no doubt ruined many childhoods. There are a number of people who haven’t set foot into a body of water no bigger than their bathtubs since the films release and I don’t blame them.

Seriously, who wants to be eaten alive while wearing a swimsuit? I sure as hell don’t.

If you think that after 37 years someone would have made a better shark film than Jaws then you would be horribly mistaken. That is, unless, you were scared so bad by Mega Shark vs Giant Octopus that you had to see a therapist because every time you got out of bed in the middle of the night you thought a shark would shoot through the floor and drag you into the dark depths of its blue hell… If that is the case, then you have much worse things to worry about my friend.

That is why Jaws is such a special film. In the many years since its release no one has been able to do it better. So for that, I thank you Mr. Spielberg for creating one of the most iconic monsters in cinematic history. Out of all of his amazing work, this is perhaps his greatest masterpiece. It is one of the most effective thrillers ever made and will no doubt continue to ruin the lives of many. Including my own.

As always, thanks for reading.

17 thoughts on “Jaws and My Fear of Sharks”