Mark your calendars! On March 12, 2013 The Blob is getting its much anticipated Blu-ray release through The Criterion Collection. The Blob is one of the quintessential B-movies of the 1950’s and I’m very happy to see it getting the blu-ray love that it deserves.

“A cult classic of gooey greatness, The Blob follows the havoc wreaked on a small town by an outer-space monster with neither soul nor vertebrae, with Steve McQueen playing the rebel teen who tries to warn the residents about the jellylike invader. Strong performances and ingenious special effects help The Blob transcend the schlock sci-fi and youth delinquency genres from which it originates. Made outside of Hollywood by a maverick film distributor and a crew whose credits mostly comprised religious and educational shorts, The Blob helped launch the careers of McQueen and composer Burt Bacharach, whose bouncy title song is just one of this film’s many unexpected pleasures.”

The special features include:

-New high-definition digital restoration, with uncompressed monaural soundtrack on the Blu-ray edition
-Two audio commentaries: one by producer Jack H. Harris and film historian Bruce Eder and the other by director Irvin S. Yeaworth Jr. and actor Robert Fields
-Trailer
-Blobabilia!, a gallery of collector Wes Shank’s rare trove of stills, posters, props (including the blob itself!), and other ephemera
-An essay by critic Kim Newman 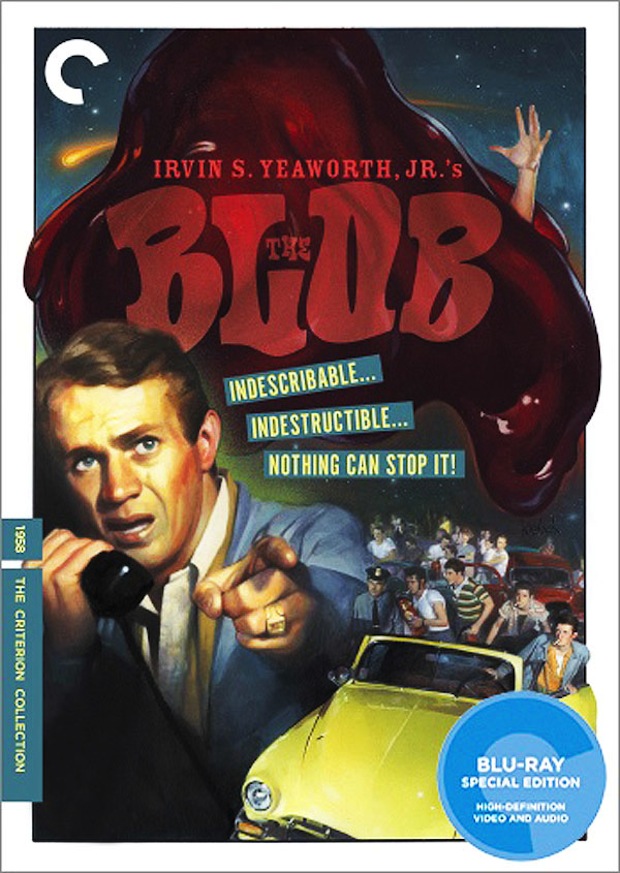