Ti West’s latest horror film, The Sacrament, will see its World Premiere at TIFF this year as part of their Vanguard program. Up until now there really hasn’t been much word surrounding West’s mystery project. Hell, the last we heard about The Sacrament was back in late January so it’s nice to not only see that it’ll be premiering very soon but we’ve also got a new still to have a look at.

The Sacrament follows two Vice media correspondents as they set out to document their friend’s search to find his missing sister. They travel outside of the United States to an undisclosed location where they are welcomed into the world of “Eden Parish,” a self-sustained rural utopia comprised of nearly 200 members. At the centre of this small, religious, socialist community is a mysterious leader known only as “Father.” As their friend reunites with his sister, it becomes apparent to the newcomers that this paradise may not be as it seems. What started as just another documentary shoot soon becomes a race to escape with their lives.

This one has the potential to be insanely good folks, and here’s why. Not only has West established himself as one of horror’s most promising up and coming directors with his films like House of the Devil, V/H/S, and The Innkeepers, but he has teamed up with none other than Eli Roth for his latest foray into the world of horror. If Roth and West teaming up for a horror film isn’t enough to grab your attention, take a look at the cast. The film sees one hell of a genre cast come together with Joe Swanberg, AJ Bowen, Kentucker Audley, Amy Seimetz and Gene Jones. How AJ Bowen isn’t more popular these days is beyond me. The man is a brilliant actor and an absolute blast to watch on screen. I’m sure we’ll be seeing a lot more of this one in the coming weeks so be on the look out!

TIFF runs from September 5 through the 15th. 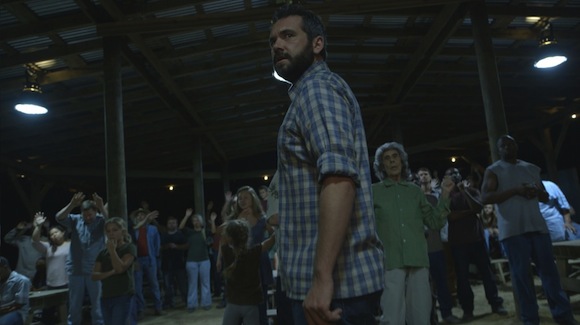