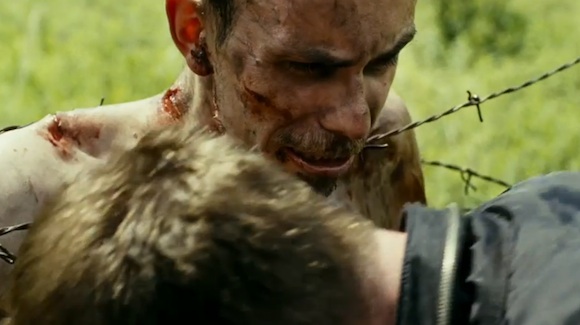 Sharlto Copley headlines Open Grave, a wicked looking thriller from director Gonzalo López-Gallego. The trailer has finally hit the web today and it’s nasty in all the right ways. Copley outta have you sold from the get-go, however, if you need more of a reason to give this one a shot then I think the trailer should do the trick. It’s a truly haunting trailer as it offers up some skin-crawling visuals and will leave you itching for more. It looks like a fantastic horror-thriller with an insane set-up that I’m sure will leave us guessing until the final frame.

A man (Sharlto Copley) wakes up in a pit of dead bodies with no memory of who he is or how he got there. Fleeing the scene, he breaks into a nearby house and is met at gunpoint by a group of terrified strangers, all suffering from memory loss. Suspicion gives way to violence as the group starts to piece together clues about their identities, but when they uncover a threat that’s more vicious—and hungry—than each other, they are forced to figure out what brought them all together—before it’s too late.

Starring alongside Copley is Joseph Morgan (The Vampire Diaries, The Originals), Josie Ho (Contagion), and Thomas Kretschmann (Valkyrie, Wanted). Open Grave will hit VOD on December 24th before its theatrical rollout on January 3rd. Check out the trailer!