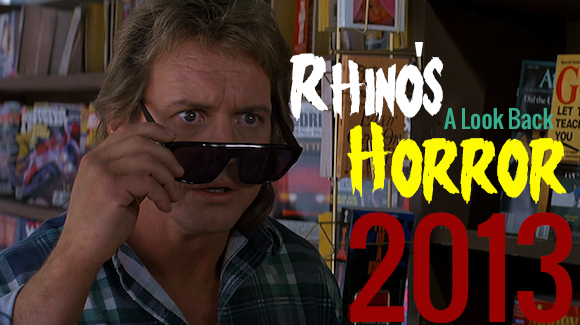 My second year of blogging is coming to and end, and what a year it was! With 2013 officially coming to an end, I’d like to take this opportunity to thank each and every one of you readers for stopping by everyday and fueling the beast that is Rhino’s Horror. If it weren’t for you guys this whole blogging thing just wouldn’t be the same, and it’s truly because of you folks that it has become such a success. This year was pretty overwhelming for me, to say the least. My blog has reached over a million total views in 2013, and it’s a number that I’m still having a hard time processing. When I originally started Rhino’s Horror I never even imagined getting a thousand views, let alone 1 million. But at the end of the day it’s just a 1 with a bunch of zeros behind it. What really matters is that you, the readers, keeping coming back for more horror, and that’s truly the most rewarding part of this whole thing. So again, thank you!

With the thank you out of the way, I’d like to take a look back at 2013 and list some of my favorite articles that I’ve had the opportunity to write. Hopefully, if you happened to have missed any of these stories, you’ll take the time now to give them a quick little look. Let’s get this shit started!

1. The Conjuring and its True Story – In this article I wrote about the “true” events surrounding the inspiration behind one of horror’s biggest films of the year with James Wan’s The Conjuring. This was hands down the most popular article on the site this year and provoked some very interesting stories amongst the commenters.

2. Drown Your Fears – This was a ridiculously creepy commercial for Herbaria calming tea featuring a couple of horror’s most terrifying characters as we saw Pennywise, Leatherface and Death all share the screen. Beautifully shot and terrifying as hell, this was easily one of my favorite videos we saw in 2013.

1. Cargo – From directors Ben Howling and Yolanda Ramke comes hands down my favorite short film of the year with Cargo. It’s a brilliant set-up that carries the most precious of cargos as a man is faced with tough decision during a zombie apocalypse. At just 7 minutes, this short film manages to pour more heart and emotion into than most feature films we saw this year.

2. So Pretty – A modern day vampire is featured in Al Loughner’s short film So Pretty in which we see a young woman run into the oldest of monsters on the subway. It’s amazingly well shot and gives us a look at a vampire the horror genre has been missing. The set-up is smart, the acting is solid, and the best part of it all is that it will have you wanting for more.

3. One Last Dive – The scariest short film to grace the horror genre in 2013 belongs to Jason Eisener’s One Last Dive. The best part? It only clocks in at one minute, and it’s sure to scare the shit right out of you. Don’t believe me? Go ahead, see for yourselves! 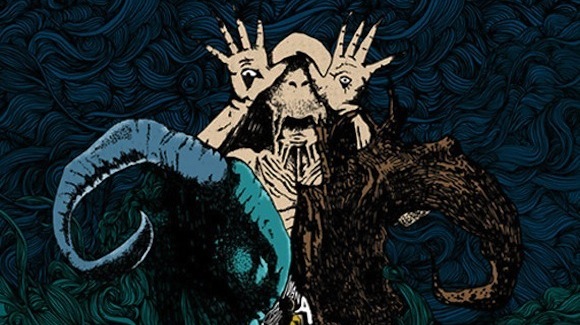 1. Mike Mitchell – My favorite gallery of the year went to Mike Mitchell’s portrait series which featured designs of some of horror’s most iconic characters.

2. Daniel Norris – When I found Norris’ work, I couldn’t have been more surprised at how fresh and unique his take on movie art was. It’s a hell of a style that’s unforgettably cool and definitely one of my favorites of the year.

3. Kyle Lambert – This was certainly one of the more unexpected art galleries we saw this year as Lambert created The Toy Shining in which he took Pixar’s Toy Story characters and coupled them with Stanley Kubrick’s The Shining. This was amazing.

1. Open Grave – This was one of my most recent reviews, but it quickly became one of the most popular. A fantastic film with a unique and fresh take on an old genre.

2. Stoker – Recently this one landed as my number 1 horror film of the year, and for good reason. A perfectly told murder mystery that was beautifully shot and wonderfully performed by its cast. A fantastic film, enough said!

3. Jug Face – Here was one of the surprises to hit the indie horror scene this year and became one of the most popular reviews on the site. A solid film with a creepy and mysterious little story.

1. Gray Matter – This was easily one of my favorite trailers of the year, and it’s for a short film no less! The trailer is for Red Clark’s short film Gray Matter and it features some of the coolest uses of practical effects you’ll find these days. It’s a short horror film adaptation of a story from Stephen King’s Night Shift collection and it looks cool as hell. Definitely give this one a watch!

2. Retro Evil Dead trailer – Fede Alvarez’s Evil Dead trailers were all very cool, but this fan-made retro style trailer trumps them all! This was brilliantly done and really brought us back to the days of old with its VHS quality and grittiness.

3. The Conjuring – The first teaser for James Wan’s The Conjuring was creepy as hell and worked almost as a short film. It was just a taste of the many terrors to come for Wan’s haunted house chiller, but what a tease it was!

3. Willow Creek (Alex Pardee) – One of the most unique posters we saw this year was Alex Pardee’s art for Bobcat Goldthwait’s found-footage horror flick Willow Creek. It doesn’t get much better than this one, folks!

As always, thank you for reading and stay scared!