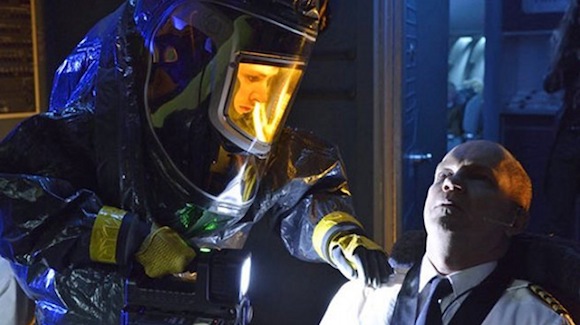 We now finally have our very first teaser trailer for the highly anticipated vampire series The Strain, from Guillermo del Toro and Chuck Hogan. It’s nice to finally catch a glimpse of the show despite the fact that it’s only a teaser. The source material is extremely dark which is exactly what this teaser points to as an eclipse blankets New York City in darkness, leaving only a disturbing message behind: He is here…

Del Toro and Hogan have created a truly unforgettable story, and in it is the kind of vampires the genre has been waiting for. Summer can’t get here soon enough!

The Strain is a high concept thriller that tells the story of Dr. Ephraim Goodweather (Corey Stoll), the head of the Center for Disease Control Canary Team in New York City. He and his team are called upon to investigate a mysterious viral outbreak with hallmarks of an ancient and evil strain of vampirism. As the strain spreads, Eph, his team, and an assembly of everyday New Yorkers, wage war for the fate of humanity itself.