I’ve got some quick release date news to pass along to you guys as Warner Bros. has just slated the sequel to James Wan’s massive hit The Conjuring for an October 23, 2015 release, setting it up just in time to haunt theaters right before Halloween! At first glance it’s kind of surprising to see that they aren’t going to give it a July release where the original film pulled in over $300 million worldwide. But as you guys know, the summer movie season is filled with one blockbuster after another, and 2015’s summer schedule is looking quite crowded with films like Avengers, Terminator, Mad Max, Jurassic World, Ant Man and Ted 2—just to name a few—all hitting theaters that summer.

You won’t see me complaining, though, because the horror genre has been severely lacking in Halloween releases over the last few years so it’s nice to see a film as big as The Conjuring 2 get pegged for an October release. As far as the movie itself, it’s still being kept tightly under wraps. What I do know is that James Wan’s return is very unlikely and that we will at least see both Patrick Wilson and Vera Farmiga reprise their roles of Ed and Lorraine Warren. What the film will be about is still unknown but it is rumored to center around a case that takes place in the ’70′s and will center on two sisters in Enfield, England, who were allegedly possessed.

It’s still a ways off, but what do you think of The Conjuring 2 getting an October release? Are you glad to see it fall under the Halloween season or would you rather they gave it a summer release like the first film? 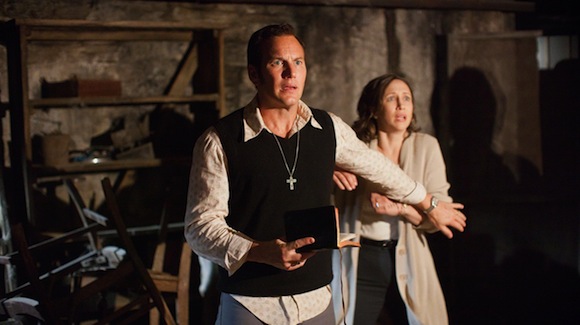 7 thoughts on “Warner Bros. has a release date for The Conjuring 2”