The Greasy Strangler, now that’s something. After leaving one hell of an impression on the genre with his short G is for Grandad in last year’s horror anthology ABCs of Death 2, director Jim Hosking will make his feature film debut with the L.A.-set slasher The Greasy Strangler. There are a lot of words to describe Hosking’s short film G is for Grandad, but the one I’m going to use is bizarre. It’s strange as all hell and I can’t wait to see what Hosking’s twisted mind has conjured up for this one.

Elijah Wood’s SpectreVision (Cooties) and Drafthouse Films (Cheap Thrills) are joining forces with Rook Films (A Field in England, Sightseers, The Duke of Burgundy) and Timpson Films (The ABCs of Death) to produce this one, so we know its in great hands. The Greasy Strangler was written by both Hosking and ABC’s of Death 2 partner in crime Toby Harvard, and it goes like this:

The Greasy Strangler is the story of Ronnie, a man who runs a Disco Walking tour in L.A. along with his browbeaten son, Brayden. When a sexy, alluring woman comes to take the tour, it begins a competition between father and son for her attentions. It also signals the appearance of an oily, slimy inhuman maniac who stalks the streets at night and strangles the innocent, soon dubbed ‘The Greasy Strangler.

Still not sold? “When Ant Timpson sent us Jim and Toby’s script, we all agreed that it was the most disgusting, vile, and all-around grotesquely hilarious piece of cinema we’d ever read, with imagery we will likely never dislodge from our tender, greasy brains,” Wood said in a statement. “And that is why it must exist!” Now this is what the genre needs; I’ll be the first one in line, that’s for sure.

While it may be a while before we see anything from this one, we do have this wonderful poster to feast our eyes on. It’s appropriately gory and offers a look at The Greasy Strangler himself. Unfortunately, I’m not sure who the artist is. 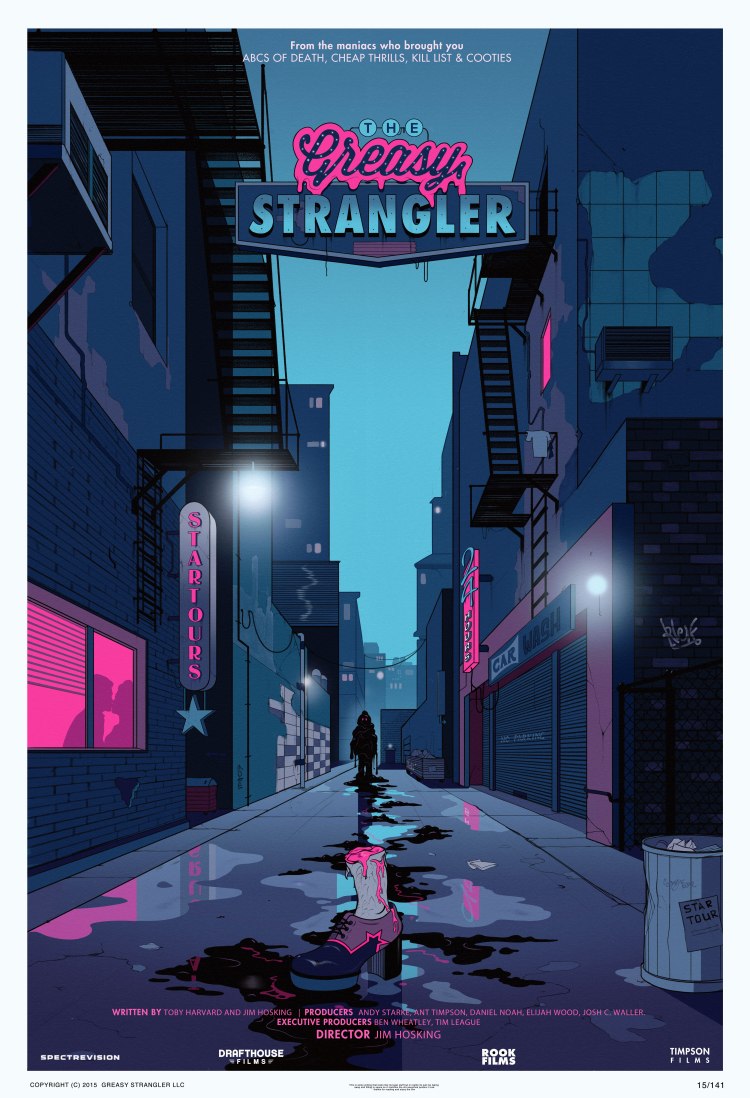 4 thoughts on “Jim Hosking’s disgusting, vile slasher debut The Greasy Strangler has the best title ever”