Although we’re starting to wind down towards the end of the year, there’s still plenty of great looking horror films yet to come. Kicking things off in November is a handful of promising features, including the highly anticipated third film from Richard Bates Jr., a festival surprise in The Love Witch and Lucile Hadzihalilovic’s stunning Evolution. But before we get started, here’s what I watched in October (not all of these films were reviewed on the site):

I Am the Pretty Thing That Lives in the House (review): Boring and aimless, Osgood Perkins’ sophomore effort never quite finds its footing.

Ouija: Origin of Evil (review): For every good thing this film did, it followed it up with something unintentionally goofy and most of that is due to its bland monster—the possessed little girl.

Under the Shadow (review): A unique story wrapped in familiar scares, Babak Anvari’s is a solid debut with some strong performances.

Lights Out: They should have instead named it Jump Scare: The Movie. Rather than focusing on building characters or any real tension, the film tried way too hard to be scary by cramming its monster down our throats with a dozen too many jump scares in the first half of the film. There’s a power in the unknown, something this film sorely missed.

The Greasy Strangler: Endlessly absurd cinematic schlock that might just be one of the most entertaining films of the year… somehow.

The Legend of Hell House (’73): An underrated gem of a haunted house movie with a few creepy scenes and a fantastic twist.

When Owen is forced to confront the past he’s been running from his whole adult life, he and his girlfriend, Isabel, become entangled in a horrifying web of lies, deceit and murder.

A homeless man named Thomas finds shelter for the night within a lavish abandoned two-story house. He eventually discovers that he is not alone and the premises won’t let him leave.

A heart-pounding thriller about a widowed child psychologist who lives in an isolated existence in rural New England. Caught in a deadly winter storm, she must find a way to rescue a young boy before he disappears forever. 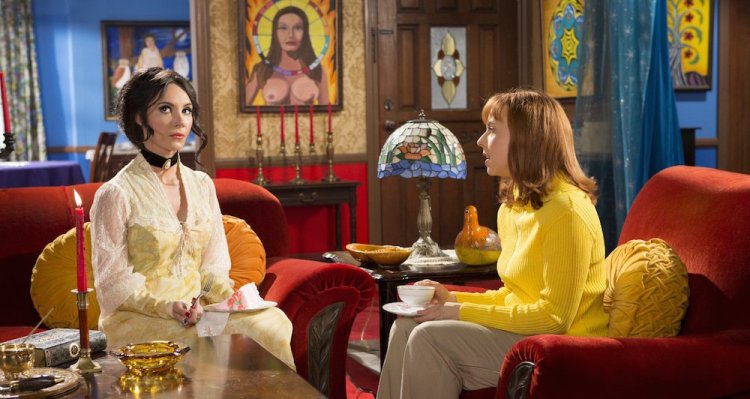 A modern-day witch uses spells and magic to get men to fall in love with her, in a tribute to 1960s pulp novels and Technicolor melodramas.

The only residents of young Nicholas’s seaside town are women and boys. When he sees a dead body in the ocean one day, he begins to question his existence and surroundings. Why must he, and all the other boys, be hospitalised?

What would we do without talented indie filmmakers continuing to push bold and unique films into the genre? Both of the must-see features this month come from a couple of directors that fit that description perfectly with Trash Fire and Evolution promising something fresh and unique.

One of these films I’ve heard nothing about and the other has been getting some high praise, which makes them perfect for taking a chance on this month. They are Shut In and The Love Witch.

I’m excited to see what RBJ has done with his third film, so for that I’m going with Trash Fire.

6 thoughts on “The Month in Horror Releases: November”