Not every child grows up believing in Santa Claus. I, however, was told that the jolly old fat guy who slides down a chimney was very much real. And why not? Kids have an unbelievable imagination and something as mystical as a man who delivers presents by way of a flying sled led by Rudolph the red nose reindeer is about as cool as it gets. So yes, I believed in Santa Claus. Of course I found it curious that Santa used the same wrapping paper as my parents. Not to mention, how did Santa ever get inside our house despite us not having a chimney? These little inconsistencies never bothered me much as a kid. So I kept believing because every year, sure enough, Santa brought me presents for Christmas and he ate every one of those cookies. He even left a note saying, “Hey Ryan, thanks for the cookies!”.

So how did I come to stop believing in Santa Claus?

Did one of my “cool” friends tell me that he wasn’t real, and if I believed in him I was a loser?

Maybe I just simply grew out of it?

It all goes back to my discovery of the horror genre. As a very young child I was introduced to some of my favorite horror movies with George A. Romero’s Night of the Living Dead being the very first film I can actually remember watching. From there it became an obsession. My aunt owned many of the classics like Jaws, Poltergeist, A Nightmare on Elm Street and many more, so I quickly started going through her collection as fast as I could. As I was nearing the end, I noticed there was one film — at the bottom of the stack — that I had yet to watch.

What could it be!? I wondered.

I grabbed it and stared at the old worn down VHS case and saw one of the coolest horror movie covers I had ever seen. 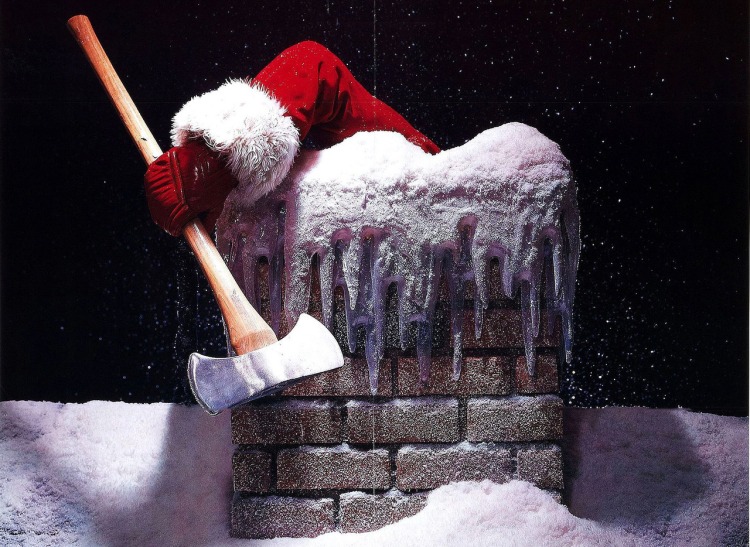 And the simple title, Silent Night, Deadly Night in bold red letters were staring back at me. Of course, to an adult this image is quite easy to figure out. Santa… with an axe… climbing down a chimney. I think we can all agree that this isn’t the idea of the jolly old fat guy we were all told about as children. As a kid, however, I can tell you that when I first laid my wondering eyes on this cover, Santa was the last thing on my mind. I can’t recall my exact reaction other than once I saw it, I could never un-see it. I absolutely had to watch this movie.

It turns out it wasn’t that easy.

Of all the horror films I was allowed to watch as a kid — and there were a lot — Silent Night, Deadly Night was the single film that my aunt forbid me of seeing. Now of course this made me want to watch it even more. All I could think about was how cool the cover looked. Days go by and I’m still constantly thinking about this movie and wondering why, of all the horror movies I’ve seen, this is the one I can’t watch.

Was it because there were boobs? Surely that can’t be it. I mean, I was allowed to watch Friday the 13th! So many boobs.

So if it wasn’t the nudity or the blood and guts, then what was it?

Days of not watching this movie turned into weeks, then months, and unfortunately… years. Yeah that’s right. I went years of suffering through not being able to get that image out of my head and never getting any answers as to why I couldn’t watch it. Eventually I couldn’t handle it anymore and I did what any young unassuming child would do.

I did exactly what I’ve been told for years not to do. I watched Silent Night, Deadly Night. I told everyone I was going into the room to watch Back to the Future again and instead of grabbing the DeLorean, I grabbed Santa with an axe. I locked the door behind me and placed the tape into the VCR and my sweaty hand hit the play button.

And that is how I stopped believing in Santa Claus. I finally understood why I was sheltered from this film. Not because of the boobs or the gore, but because it is about a tormented teenager who dresses up as Santa Claus and goes on a murderous rampage. It all makes sense now. It was my fault, I should have done what I was told and stayed as far away from that movie as I could. But you know what they say, he knows when you’ve been naughty.

Someday when I have a kid of my own you might ask me if I’ll let him — at a young age — watch horror films as I was allowed to.

The answer to that is simple.

And will I let him watch Silent Night, Deadly Night?

But only because there’s boobs in it. 😉

22 thoughts on “How I Stopped Believing in Santa Claus”