Alright, you beautiful and complete strangers, I’m going to try something a little different around here since I’ve been slacking in this department for quite a while now. Because I haven’t been reviewing movies lately — mostly due to a severe lack of free time — I thought I would start doing a monthly round-up of sorts where I give you my thoughts on the new horror films I watch each month. Although these won’t be in-depth reviews, hopefully this will act as a quick guide for your genre picks throughout the year. 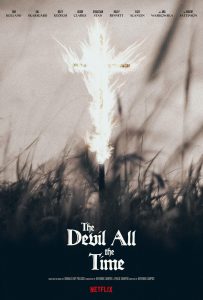 THE DEVIL ALL THE TIME is just… holy shit. It’s not your traditional horror movie, yet it packs more horror in its nearly 2.5 hour runtime than pretty much anything else you’ll see this year. It’s this dark sprawling drama about the horror in humanity and what happens when the devil wins.

The title says it all — The Devil All the Time — and they really do mean ALL the time because there isn’t an ounce of hope to be found here. And if that sounds depressing… well that’s because it is, it’s so very depressing. But from a storytelling point of view and the way the film seamlessly interweaves multiple storylines and characters into one masterful telling of death, it’s quite impressive. Your mileage may vary here, and I’ll admit 2.5 hours of this shit is tough to sit through, but man is it one hell of a film.

THE OWNERS is pretty much exactly what you thought it would be. If you’ve seen the trailer, you’ve kind of seen the whole movie — I found it funny that it prides itself on being a home invasion thriller with a twist, yet shows that very twist in the trailer. Like… what? Hey, movies that do that, stop doing that.

That being said, it’s not without its fun moments and Maisie Williams kills it (unsurprisingly) as a final girl, so you could certainly do worse. The tough thing about a movie like this is that there are no characters to root for, so it has an uphill battle trying to get the audience to actually give a shit about what’s happening. Don’t Breathe had a similar problem, except that movie was incredible… so… yeah. They can’t all be Don’t Breathe, though, y’know?

BABA YAGA was definitely the biggest let down for me. It certainly looked the part and you can tell there’s a lot of James Wan influence here, but man did the story just suffer from clichés and boring characters. One way to guarantee I’ll be disinterested in your movie is to show the protagonist getting bullied 5 minutes in — hey, filmmakers, is there really no other way to portray that your character is an outcast?

When your main character isn’t even original, you know the story and its scares won’t be either. And that’s the biggest issue I had with the film as a whole — it’s not necessarily bad, but it’s just so basic and one-note that it just blends into a sea of other extremely okay movies. At least bad movies are entertaining… 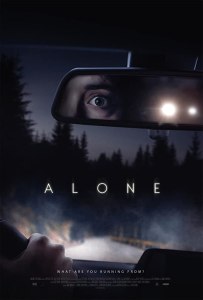 ALONE really ran me through so many emotions — I liked it… then I didn’t like it… and then I thought maybe I liked it? The problem with this movie is that it has all the elements of a great thriller — because it copies nearly all of them, for better or worse — but it’s just so silly and unbelievable that it’s hard to take any of it (especially the killer) seriously.

I’m not kidding when I say this, but this dude finds and catches this chick no less than 20 times in the movie. Like… we GET IT, you’re good at finding people. Awesome. How can someone be so good at finding you — he impossibly tracks this girl through a river, a dense forest in the middle of the night during a thunderstorm, across the state through twisting roads, and so on — and yet he can’t manage to actually… you know… capture her for more than 5 seconds. There’s a part in the movie where he somehow cuts a large ass tree down to block the road despite having absolutely NO CLUE where she has been for half the movie; Jason doesn’t even have those superpowers and that motherfucker had to drown in a lake first. Just no. Stop.

Movie of the Month – The Devil All the Time

5 thoughts on “The Aftermath: Reviews for The Devil All the Time, The Owners, Baba Yaga, and Alone”