Alright, you beautiful and complete strangers, I’m going to try something a little different around here since I’ve been slacking in this department for quite a while now. Because I haven’t been reviewing movies lately — mostly due to a severe lack of free time — I thought I would start doing a monthly round-up of sorts where I give you my thoughts on the new horror films I watch each month. Although these won’t be in-depth reviews, hopefully this will act as a quick guide for your genre picks throughout the year.

RELIC had the bar set pretty high — there’s been a lot of comparisons to Hereditary — and all the major praise pegged this one as one of the year’s best films. In other words, to say I went in with high expectations would be an understatement. For some reason, however, Relic just never really clicked for me. The film is shot beautifully, the pacing has those art house slow-burn vibes that tend to do quite well, and there are plenty of creepy moments throughout. And yet, despite it all, the film just feels like it’s reaching for something that isn’t there.

I can see why it’s getting so much love, though — there is a genuine sense of horror in its atmosphere and the story’s familial heartache really hits home. That being said, I struggled to buy into the final act. It’s a batshit way to end the movie — and I appreciate that it goes for broke here — and I get what it’s ultimately trying to say about mental illness, but the problem is that it just doesn’t work within its own context. It throws out everything that gave it an identity — and its emotional strength — in order to be edgy and weird just for the sake of it. Look, it’s a fine movie but definitely curb your expectations. Hereditary this is not. 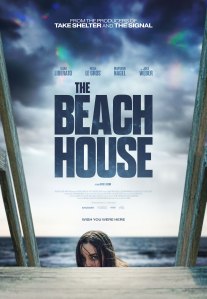 THE BEACH HOUSE is definitely the most timely of the bunch, but as much as I wanted to love it, it just doesn’t stick the landing. There’s a couple of great moments — mostly in the second act — and the practical effects were a sight for sore eyes, but… that ending. It’s as if the filmmakers ran out of budget before they could film the actual ending of the movie.

The result is a solid build up that asks some genuinely interesting questions while creating a world you hope to see fleshed out, but instead it just ends with a weird, mostly bullshit moment with its protagonist that’s more confusing than anything else. The movie makes you think it has a point… like there’s a story in there somewhere, but by the time it’s over you’ll be questioning why you wasted your time. A lot of people seem to be digging this indie invasion flick, and you might too, just know that it’s probably not going to make any sense. 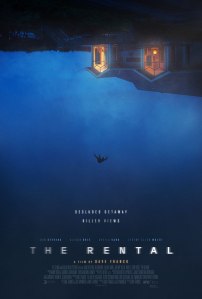 THE RENTAL might end up being the genre’s biggest surprise of the year — a psychological slow-burn with and old school slasher hook is precisely my kind of shit. What’s interesting about this one is that it almost feels like two separate movies — the first two acts play like a psychological character piece that slowly devolves into a nightmare. By the end, however, this one becomes an unapologetic slasher with shades of Myers — jumpsuit and everything  — and I dug every second of it.

My only complaint is that all the build up kind of fizzles out quicker than I’d like — all this time we spend with the characters and the movie ends their individual arcs way too quickly. Rarely do I complain about a movie being too short but I would have loved to see that third act stretched out even more because it was just that good. Don’t miss this one. 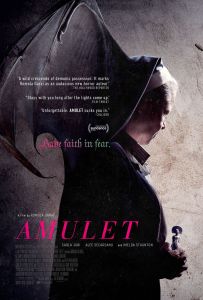 AMULET is one of those movies that’s nearly impossible to recommend — just look at some of the reviews, it’s about as polarizing as it gets. People seem to love this one based on how much it goes off the rails in the final act; it’s a ballsy film with some truly mind-blowing shit going on. On the other end, however, that paired with the fact that this movie moves at a snail’s pace seems to be where it’s losing a lot of people.

I fit somewhere in the middle. I appreciate how insane this movie is trying to be, and can totally embrace the madness of it all, but it’s just so fucking slow that it’s hard to really stay invested throughout the entire film. That being said, I’m leaning more on the positive side for the simple fact that it’s original as hell and you’ll most definitely not see anything like it this year.

Movie of the Month – The Rental

4 thoughts on “The Aftermath: Reviews for Relic, The Beach House, The Rental, and Amulet”