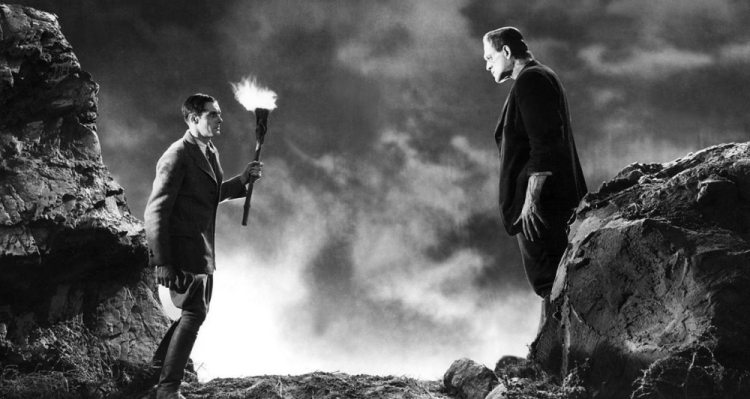 “The man who made a monster” says it all. Here’s a film and a monster that needs no introduction (especially for you guys), so we’re going to instead stare (and drool) at how ridiculously cool this piece by artist Anthony Petrie is. What I love about this one is that it gives us a look […]

I knew it was only a matter of time before we saw Twentieth Century Fox’s retelling of Mary Shelley’s novella undergo a title change. Before it was simply known as Frankenstein, but now we can start calling it Victor Frankenstein. While it might not sound like much, the new title actually helps this movie out tremendously. Mainly, […]

Here’s a remake that has managed to stay out of the spotlight lately thanks to all the other remakes on the horizon. Now that cameras are finally rolling, however, we finally get our very first look at Twentieth Century Fox’s upcoming new take on the classic Marry Shelley tale of Frankenstein. The first photo reveals […]

At this point I hardly need to give brilliant artist Jason Edmiston much of an introduction as I’ve featured his work right here on Rhino’s Horror numerous times. Today, Mondo announced one hell of a Halloween treat as they will be releasing his Universal Monsters art tomorrow, Wednesday, October 16th! Some of you guys may […]

Not too long ago we learned that 20th Century Fox’s upcoming Frankenstein was looking to possibly cast either Jack Huston or Toby Kebbel for the role of Victor Von Frankenstein. Either of those would have been great choices for the title character, but Fox decided to go with another great actor in James McAvoy. That’s […]

Last we heard from 20th Century Fox’s upcoming Frankenstein was that Daniel Radcliffe was set to star as Igor, the hunchback assistant to Victor Frankenstein. Now, according to Deadline Fox is having both Boardwalk Empire’s Jack Huston (above) and RocknRolla’s Toby Kebbel (below) read for the part of Victor Frankenstein. While the list of possible […]